well what a strange thing
doesn't seem to matter, once you upload it to blogger servers it's a jpg, even if it was a gif on your computer.

I was asked by a lovely illustration friday artist lady if I could help another member with a blogging question.
I said I would be happy to give it a try, and found that he (the member with the problem wanted to know how to put his own banner image on his blog.
well having studied HTML for five minutes with on-line resources like webmonkey and echoecho I felt I could give it a pretty good shot.
so I wrote this guy a long email explaining what he would have to do, and anyway, to cut a long story short, I thought that maybe I would like to give it a go myself.
so having found my banner image in my template, which is the not at all unlovely
following gif from the original tic-tac template that I am using

I set about making a replacement from one of my favourite themes, little ball paintings. (also seen in a previous post)
the following is the same image that I used for the invitation to my last exhibition, now one year ago in madrid.

so I uploaded the gif that I made in fotoshop and got a jpg bit of html, so thinking I must of uploaded the wrong one I went about it again and got the same thing.
so I have to use a jpg when I change my banner image.
oh well, I hope it works alright. You will probably know by now, having opened this page you will have seen the balls or the cool blogger header.
balls mean, I rock, cool header means my coding skills are of the level that I fear.
isn't blogging grand.
(if you haven't worked it out by now I still haven't tried to change the banner. I will do it after I post this)
anyhow I have decided that you lucky devils don't even have to click on that link, if you don't especially want to as I am going to get a bit more milage from the images that I uploaded then by using them again here.
this is the painting that I have done that took the most time. 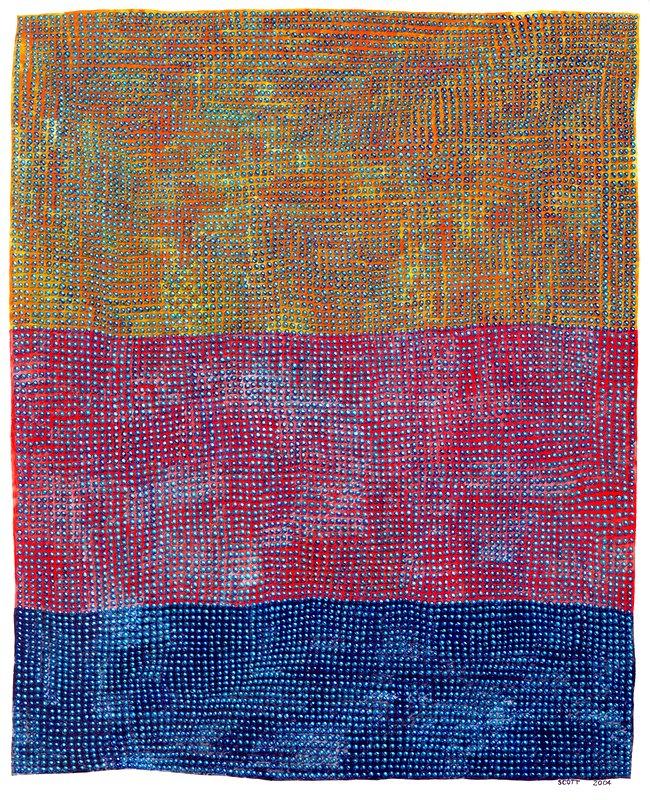 three months, it took. with time off for good behavior.
or really with a couple of weeks where I had to work on other things because it was getting a form of carpal tunnel syndrome.
that's three months where I was working 10 to 12 hours a day.
there is ten thousand eight hundred and twenty blue balls there. 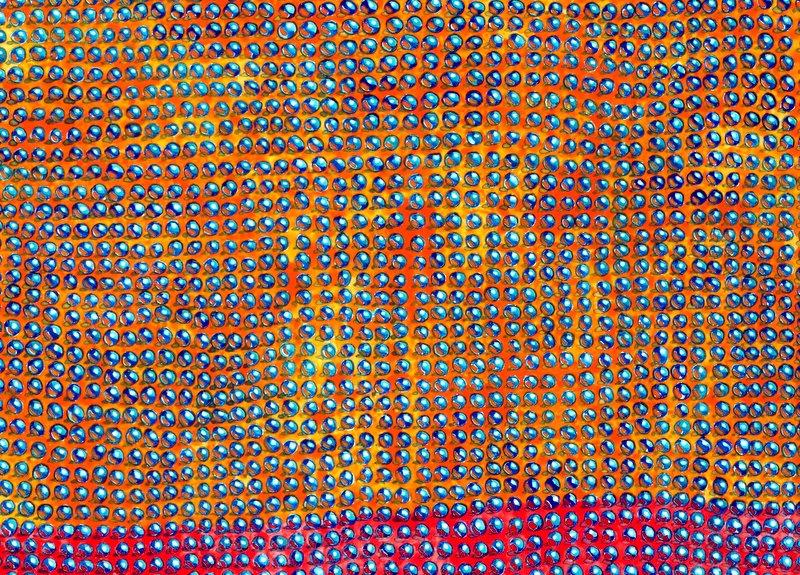 each has seven steps to complete it and the background is painted between the balls, as one of the last steps.
well before the shadows anyway. 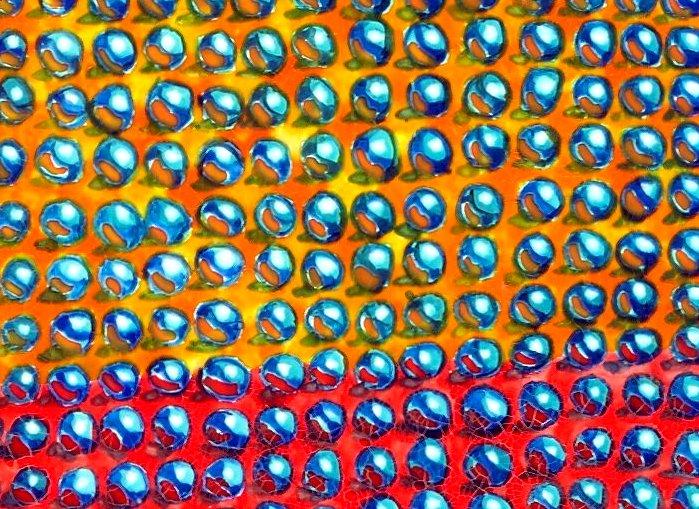 the whole thing is watercolour on gesso, and as you can see there is a lot of cracking and crazing, a thing which I think adds to it's charm.


I just hope that it doesn't mean that at some point the paint will just fall off.
I hope it is in some museum by then.
(which contradicts what I think will happen, but we can all dream ¿no?
I should point out that the whole painting is 27 X 22 cms or 11 X 9 inches so it's fairly concentrated painters energy there.
I did fear that I wouldn't finish it a few times.
(right near the start too, when I realised that I should have left the space, that represents the reflected highlight of each ball. I had to draw the paint back off the surface of the gesso with the tip of a paintbrush putting the tiniest little drops of water on each one and then drawing that water and paint up with the brush and then cleaning the brush on kitchen paper and with water and then repeat. etc. ad infinitum) 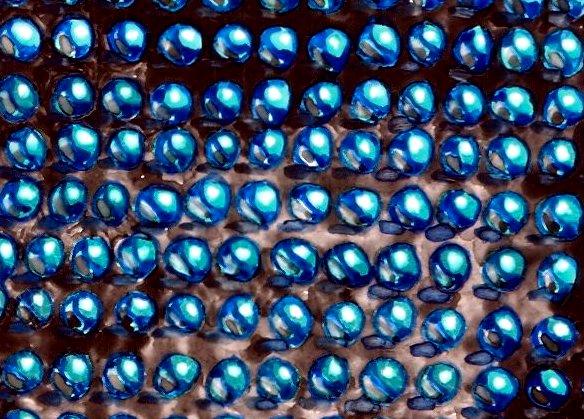 anyhow an experience it was.
got me a mention in the review of a competition exhibition in an arts newspaper here in madrid (el punto de las artes) where the reviewer, who remained nameless, even after I rang to ask who it was, lumped it in with a couple of other works in the 'also worth a mention' part of the review.
after getting my name badly wrong, as did the organisers in the catalog and on the wall tags, he said that my work represented a new and interesting discourse.
so I was pretty pleased with that,(one has to take what one can get, otherwise known as beggers can't be choosers) and of course I think it does.anyhow I should really be doing other things, but I have recently discovered that there is a large art materials store not far at all from here so I think I am going to go take a look and take my little doggy mate for a walk at the same time
kill two birds with one stone as it were

I'm having some second thoughts too
I am thinking that even if I succeed in putting my new banner up I might end up going back to the other if it looks better.
I didn't think much before making this one and I think I could have made a better job.
I'll see how I go, see how it looks.
thanks go out to anyone who is visiting, rest assured I will return the favour
isn't blogging grand

Love the painting – ooooh, the pain of repetition… I can just feel – it hurts so good. I was just awe struck with number ten thousand eight hundred and twenty!!! The result is fantastic! Thank you for sharing! Lily White.

Wow. Ten thousand+??? You have dedication and patience of biblical proportions. Great job!

so scott my honest critique: I think you will receive the recognition you so richly deserve my friend! EXCELLENT work! Really impressive. I"m happy for you!

Hello
I made my blog-banner a gif and uploaded it still is a gif. Could it be, if the dimensions af the file are bigger than the shown size, it is converted to jpg? Otherwise I would not understand why it still is a gif on my blog.

great painting...and hard work for shure...are you based in madrid, uhm...?

THese are amazing artworks!! WOW!!

This is absolutely beautiful. I'd love to see it in real life

scott
white boy, getting older, but still a white boy.